“You can say a prayer, but it’d better be short, because I’ll have you all killed before you finish a long one.” Quote attributed to Joe “Scarface” Turner. Union Revolts of the Jupiter-Pluto circuit. “Scarface is a scoundrel of the worst kind. He is not just arrogant, but also rash, stubborn and completely out of control. Add to that years of experience in combat and you have the personification of a potential and imminent catastrophe; a danger to all those around him. In short, he is perfect for the kind of operations you want us to run on Ariadna.” Nasim Balidi, tactical manager of the Druze Society. Organizational meeting with representatives of the MagnaObra Corporation. Ariadnan Commercial Conflicts. “Joe! Don’t jump down there! I don’t care if they have regrouped at the bottom of the C-Hold! It is very deep and I don’t have spare parts for the leg enhancers! Oh… well, you are an idiot! Thanks, brother!” Cordelia Turner through Scarface’s intercom. Defensive operations of the Red Arc orbital shipyard, under contract to the Metroplex Corporation. “Scarface and Cordelia? A brutal beast for hire and his fairy Godmother. Black and White. One only knows how to destroy while the other can repair anything. The first one wouldn’t last long without the second one.” Emiliano Guevara, officer of Nomads Black Hand. Evaluation report of independent operatives of the Sphere. You will find more in the “Infinity. Campaign: Paradiso” book. 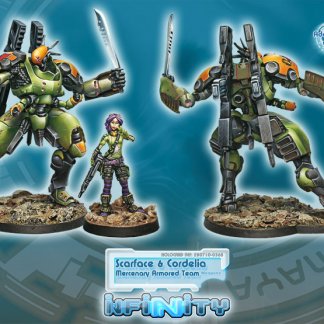