I have been playing wargames for a majority of my life, and it was my time among wargamers which led me on to RPGs.
Reading the short pieces of fiction in rule books, codices and army books, coupled with the individual feats of troopers on the tabletop, did make me think more of the individuals that comprised my forces, so it was only natural that I became more and more interested in games that would focus on these unnamed soldiers, their own careers, and what such people can do while away from the battlefield.

I have always had an interest in surrealism and dark, twisted imagery to which there was no immediate, obvious interpretation.
David Lynch, H.R Giger, Ian Miller, John Blanche; all had works which would influence my writing in RPGs and the sort of imagery I would try to convey to my players.

Of course, being a teenager in the ’90s, another great source of influence was anime.  The ’80s had produced some really strange, surreal anime indeed, and at this point in my life I had only begun to discover them; back then we didn’t have much mainstream exposure to anime so I latched on to any I could find – most of them resided in VHS tapes in a dark corner of HMV.  I never did buy any – just marveled at the cover art and synopses mixed with screenshots, my mind spinning as to how this cartoon could possibly have an 18 certificate.
For those that I managed to catch on TV, the combination of animation and surrealism was an irresistible lure!

Anyways, just today I was reunited with one such surreal anime from 1985, Angel’s Egg. 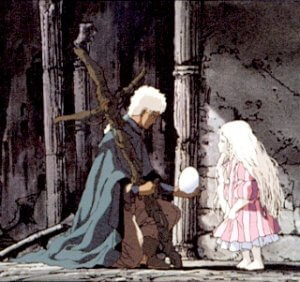 I had never seen the entirety of this anime before; only small segments of it…
I posted the story about this over on the Infinity forums, in my “W tee Eff? 0_o” topic, but I thought I’d also share it with you, here:

“Today I spotted a trailer for an obscure anime, Angel’s Egg.
A stand-alone movie, the whole thing is pretty damn surreal.  But in a way that 80s anime seemed to do best without resorting to End of Eva-esque, 3edgy5U, angsty bullshit.
After some research, it seems even those who wrote it weren’t entirely sure what it was about.

In short, a stranger wandering the wastelands observes the approach of a spherical ship, decorated with angelic statues and blaring whistles.
He enters the shattered remains of a destroyed city and is met by a young girl carrying a very large egg of unknown origin and contents, though the girl believes she must one day return it to an angel. 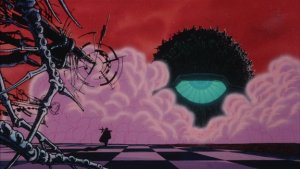 I found the backgrounds and landscapes quite reminiscent of the works of Ian Miller with his depictions of blasted hellscapes and flat, bleak plains dotted with twisted pylons, cranes and other bizarre structures, though he had nothing to do with the production.
All’s I know is they don’t make ’em like this any more!

The WtF is that I had already seen some of the sequences of Angel’s Egg but in another film from 1988 – In The Aftermath: Angels Never Sleep.
This film was live action, cut with scenes from Angel’s Egg, and more obviously post-apocalyptic in tone as the cast wander around scavenging what they can from their apparent desert-based industrial complex, walk past dead, radiation-burned bodies, and always have to wear gas masks or hazmat equipment while outdoors.
The girl from Angel’s Egg appears later on in the live action segments of the story, with the animated sections re-dubbed to cast her as an angel who has to bestow her egg to someone she trusts. In this case the film’s hero, Frank. 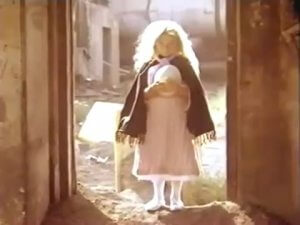 I did see it on the SciFi channel when I was quite young, but I couldn’t get my head around it. The two sides of the film; animated and live action; did not mesh well at all, to me, and in the end very little of it made any sense whatsoever.  I wanted to see more of the surreal anime, so the live action film became more of an annoyance than anything else.
I couldn’t help but think why anyone would make such a mess of a film – splicing footage from one to pad out the run time of the other. Were they desperately trying to appeal to two different fan bases – post-apocalyptic horror and anime?  Why would anyone do such a thing?

Today, after a tiny bit of research, it all became clear…